Five Reasons You Need to Migrate Now From Windows Server 2003

If you are running your business on Windows Server 2003, time is running out: support ends on July 17. And while it may be tempting to keep running your apps and data on a 13-year-old operating system that's been working for you well enough -- in this case, the old adage "If It Ain't Broke, Don't Fix It" simply doesn't apply. If you haven't already embarked on your migration, you need to start NOW.

Microsoft announced the date for Windows Server 2003 End of Support last summer, but surprisingly, there are still many organizations that haven't taken any action!

That's understandable: No one looks forward to the inevitable disruption triggered by changing tried and true systems, not to mention the time it takes to re-train users on new versions of software. You may have decided to wing it without support until the next release of Windows System and Server Center -- which has been pushed to 2016.

"Although we know when we put these things in that there's going to be some point when they're going to have to be updated to a different version, for a lot of reasons - many of which are valid - people either postpone, delay, or don't want to look at any sizeable project that's involved in migrating," says Carl Claunch, Vice President and Distinguished Analyst at Gartner Research.

Here is why you shouldn't delay your migration away from WS 2003:

Some organizations are legally and contractually bound to use only supported platforms. Since Microsoft will offer interim support for organizations in the process of a migration, you need to have started one before July 15 -- or arrange an expensive CSA (Custom Support Agreement) in order to comply.

This real and inherent danger doesn't apply just to large corporations like Sony: A recent study reported that 62% of breaches impact smaller organizations. In 2013, Microsoft issued a total of 37 security patches to Windows Server 2003. After July, you'll be on your own. If you are attacked, you'll likely need to shut your server down, and that's going to create bigger headaches than making a change now.

3. Support on current applications may also be dropped.

Can your organization live without performing any kind of upgrades to its favorite applications? At some point, new versions of old software will not perform well on WS 2003.

4. New software may not run on old server.

The same goes for new applications your organization may choose to run. Within a couple of years, it is likely that these will not have been tested on WS 2003.

5. You may be eligible for discounted migration help.

There are funds available for Microsoft partners to use in facilitating migrations to Windows Server 2012 RS and Azure, and your organization may be eligible to take advantage of those deals. Also, support will continue for organizations that are in the midst of migrating, so your data will remain secure. 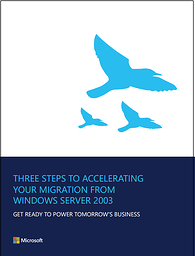 Your migration begins with a good plan: Start creating one by

: "Three Steps to Accelerating Your Migration from Windows Server 2003 - Get Ready to Power Tomorrow's Business."