Datalink Staff Writer About The Author

Ford Motor Company is powering their business with the cloud in a big, bold way: By debuting a new, hybrid cloud-based service that will allow car owners to upgrade their in-vehicle infotainment systems automatically -- and like many of our customers, when it came to choosing a platform to run it on, they selected Microsoft Azure. 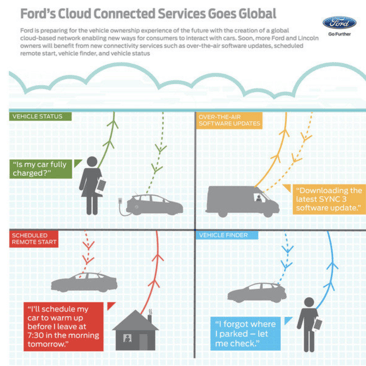 The U.S. automaker will begin selling some cars later this year with a computer system that can be automatically updated anytime the car connects to a Wi-Fi network. The cloud-based system is expected to be available in all of Ford's cars by the end of 2016, according to Don Butler, Ford's executive director of Connected Vehicle and Services.

The system -- the Ford Service Delivery Network -- will enable car owners to more easily get new services, even if their car is as much as 10 years old.

Ford is using cloud computing, data analytics and in-car software to change the consumer experience. Now a car's navigation, entertainment and communication systems will be refreshable.

Previously, Ford's infotainment system could be updated -- but only by bringing the vehicle into a dealership or via a USB stick.

With a cloud-based system, updates to the car's navigation system, contacts, audio system and center touch screen will be easier.

The updates should download seamlessly, without the driver being distracted -- or even aware -- of it happening.

"We couldn't do this without the cloud," Butler told Computerworld. "It's really the only way to do it. Otherwise, we'd still need people to make a physical connection either at the dealer or through a stick."

Other auto companies, including Tesla Motors, will be using over-the-air updates and cloud services to upgrade car owners' infotainment, safety and powertrains.

Zeus Kerravala, an analyst with ZK Research, said car owners rarely update their in-car systems when they have to drive to the dealer or get a USB stick. The cloud-based service should make it easier for systems requiring updates to work.

"I think it will be something that's expected eventually," he said. "Using the cloud is smart as it's the only scalable way to do real time, over-the-air updates."

To make this work, Ford is using a hybrid cloud system, which combines the features of a private and public cloud system.

Customer-sensitive data, such as the owner's name and address, the vehicle's mileage, its location and how well it's running, will be stored on a private, on-premise cloud network that was built by Ford's IT department.

For the public cloud, Ford is using Microsoft Azure, which the company uses for software updates.

Microsoft also is supplying the connection between Ford's private cloud and the Azure public cloud.

"It's a flexible solution that lets us tailor it to our needs," Butler said. "Azure allows us the ability to flex between our own data centers and public data centers. And it's global."

That flexibility is the reason Ford's IT executives chose Azure, instead of another cloud provider, like IBM, Google or Amazon Web Services (AWS).

"We wouldn't have had that kind of flexibility with AWS or Google," Butler noted. "You use their cloud as they constructed them. With Azure, we've constructed and architected our own service delivery network, and Azure is a component of that network. It gives us the ability to have a solution that bridges their public cloud and our own private cloud. Azure is the plumbing that connects the two clouds."

Ford also had already worked with Microsoft on its in-vehicle software, so the Redmond, Wash., company came to the cloud job with an understanding of the automaker's vision and needs.

"It's important to work with a partner that understands the environment you're trying to operate in," Butler said. "Microsoft had that."

Kerravala said he's a little surprised that Ford selected Microsoft. "I think Azure versus AWS versus Google is really in the preference of the customer," he added. "I think most people think of Amazon as being the de facto standard of the cloud, but Azure is a solid choice, too. Azure has Microsoft support behind it and may prove to be easier to grow long term because of that."

Ezra Gottheil, an analyst with Technology Business Research, said it makes sense for Ford to stick with Microsoft since they have a history of working together.

"As far as picking Microsoft, Ford and Microsoft have been collaborating for a long time," he noted. "And Azure is a good platform for managing digital assets on a network. Here, it's really two things -- the Azure fabric, which is a software services platform, and the Azure service, which is Microsoft's hosted version of the platform. Both make sense here."